Pamela Quinzi is a Celebrity Fashion Designer and entrepreneur born and raised in Rome, Italy. She moved to New York in 2009 and created her brand Kilame of One of a Kind Shoes, dresses and accessories. The idea of a New Modern Princess traveling the world wearing Pamela Quinzi’s creations. The image of an independent, strong woman proud to show who she is and what she likes with fashion, glam, and unique outfits.

Pamela Quinzi worked and showed her collection in Top luxury and prestigious locations in Manhattan and in 2012 she had the opportunity to do a Fashion Show of her Kilame Collection at the Empire lounge, a beautiful space inside The Empire State Building, on the ground floor. The event was organized by Dining Engagement Group and Victoria Wells.

Models walked the runway wearing dresses and shoes created by Italian designer Pamela Quinzi, honored to be part of such an amazing show inside the most iconic building in New York City, The Empire State Building. She remembers that night with excitement and pride, New York changed her life and inspired her Fashion Brand Kilame. ‘The Empire lounge with a classy and elegant atmosphere was the perfect location to have a Fashion Show, the main room was full of people and photographers ready to capture the best photos of the event, I couldn’t contain my joy, it was a magic night.’ says Pamela Quinzi. 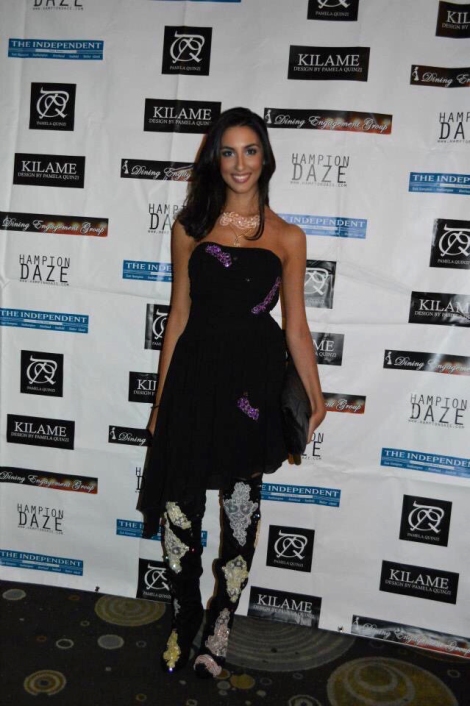 is a 102-story Art Deco skyscraper in Midtown Manhattan, New York City. It was designed by Shreve, Lamb & Harmon and completed in 1931. Its name is derived from “Empire State“, the nickname of New York. The building has a roof height of 1,250 feet (380 m) and stands a total of 1,454 feet (443.2 m) tall, including its antenna. The Empire State Building stood as the world’s tallest building until the construction of the World Trade Center in 1970; following the collapse of the World Trade Center in the September 11, 2001, attacks, the Empire State Building was again the city’s tallest until 2012. As of 2019, the building is the seventh-tallest building in New York City, the sixth-tallest completed skyscraper in the United States, the 45th-tallest in the world, and the sixth-tallest freestanding structure in the Americas.

The site of the Empire State Building, located in Midtown South on the west side of Fifth Avenue between West 33rd and 34th Streets, was originally part of an early 18th-century farm. It was developed in 1893 as the site of the Waldorf–Astoria Hotel. In 1929, Empire State Inc. acquired the site and devised plans for a skyscraper there. The design for the Empire State Building was changed fifteen times until it was ensured to be the world’s tallest building. Construction started on March 17, 1930, and the building opened thirteen and a half months afterward on May 1, 1931. Despite favorable publicity related to the building’s construction, because of the Great Depression and World War II, its owners failed to make a profit until the early 1950s.

The building’s Art Deco architecture, height, and observation decks have made it a popular attraction. Around 4 million tourists from around the world annually visit the building’s 86th and 102nd floor observatories; an additional indoor observatory on the 80th floor opened in 2019. The Empire State Building is an American cultural icon: it has been featured in more than 250 TV shows and movies since the film King Kong was released in 1933. A symbol of New York City, the tower has been named as one of the Seven Wonders of the Modern World by the American Society of Civil Engineers. It was ranked first on the American Institute of Architects‘ List of America’s Favorite Architecture in 2007. Additionally, the Empire State Building and its ground-floor interior were designated as city landmarks by the New York City Landmarks Preservation Commission in 1980, and were added to the National Register of Historic Places as a National Historic Landmark in 1986.